On the second day after the NDRC announced the ratio of shares to the opening time period, on the morning of Wednesday, April 18th, the collectives of Chinese automobile stocks plummeted and the A shares of GAC dipped to a stop. The Hong Kong stocks of Beijing Automobiles fell by 15.23%, GAC Group, Zhengtong Automobile, Brilliance China fell more than 9%. The reason for the sell-off of many institutions and retail investors is that after the stock ratio is released, foreign automakers will invest solely in production, or will attack the self-owned brand car companies, and the profit of the four major state-owned automobile groups will be affected. However, Sina Automotive believes that such fears are superfluous. 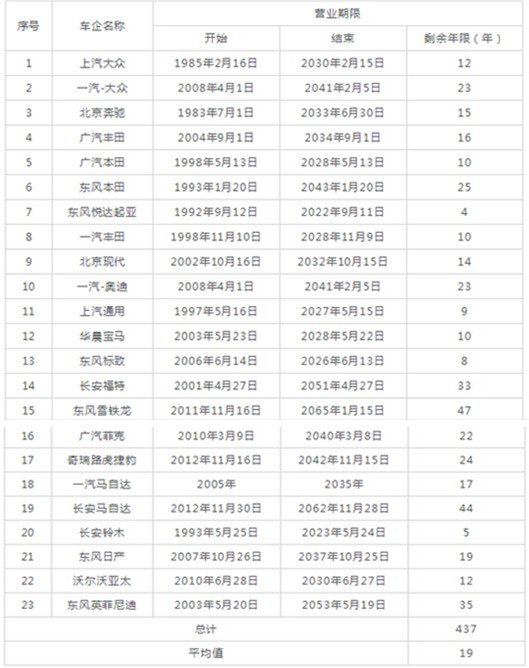 According to incomplete statistics of Sina Automotive (part of the major joint-venture passenger car brands), the average remaining joint venture operating term for Chinese automobile joint venture brands is approximately 19 years. In this statistics, Dongfeng Citroen is the vehicle manufacturer with the longest remaining lifespan. The business period of the joint venture is still 47 years, and the business period is until 2065. The joint venture model of Dongfeng Yueda Kia will be completed in the remaining 4 years, and the business term will expire in 2022. If you use the blood of the fighting game to describe, according to the NDRC shares than the release of documents analogy, Dongfeng Yueda Kia's joint venture model will be taken away by this wave of new policies, 2022 will be redefined in China sales model.

From the above table, in addition to Dongfeng Yueda Kia, Changan Suzuki also wants to quickly consider the choice of sales model in China within five years. And other brands will not be affected by the release of shares within five years. After all, the contract signed by both parties is written in black and white and it is believed that all car companies will completely fulfill the contract spirit. The author believes that the joint venture car companies in China will also be in a very long period of steady development.

Then, apart from the reason that the business hours of the joint-venture car companies have not arrived yet, it will not have a significant impact on the self-owned brand car companies. What other reason is that the automakers can continue to â€œbrand upâ€?

First, have a complete industrial chain

Wei Liâ€™s car, Li Bin, once said that todayâ€™s Chinese auto industry has the worldâ€™s top supplier companies. These companies have established China as a central point, from Tier 1 suppliers to Tier 2 suppliers. The parts needed for the car can all be found in China. In this era, there is no reason to build a bad car.

According to Brose, an internationally renowned parts supplier with doors, seats, motors and drive systems, and electronics business, Broseâ€™s turnover will increase by 57% in China market by 2023 to 2025. The amount of business in China will account for about 30% of the group's global business volume. Its turnover in fiscal year 2017 is approximately RMB 9.1 billion.

Another component giant, Bosch, had sales of RMB 91.5 billion in China in 2016, a year-on-year increase of about 3%. The Continental Group stated that global sales will exceed RMB 50 billion by 2020, and China will be the engine of growth. . It is enough to show that the Chinese automotive market is in great demand.

Judging from the actual relationship between car manufacturers and suppliers, the area where OEMs of OEMs are located will cover the supply of parts and components from two to three cities. The individual suppliers also delivered zero-time delivery to the host plant, established their own distribution and distribution station outside the host plant, and distributed a certain part according to the day-to-day demand of the host plant, so that the principle of accurate delivery of the parts of the host plant was not implemented. Even some suppliers built the factory less than one kilometer away from the car OEM. The Brose Shenyang Tiexi plant is less than 2 kilometers away from the BMW Brilliance Tiexi plant. The Changsha Bosch plant is opposite the Changfeng Cheetah factory. Therefore, from this point of view, the international parts suppliers have the same attitude toward Chinese car companies.

In terms of joint ventures, the new Dadong plant of Brilliance BMW has a complete production process, cutting-edge production equipment, and innovative production technologies such as big data, digital simulation, and the Internet of Things. The total investment is 7.6 billion yuan. According to BMW Brilliance product strategy, this factory is currently producing BMW 5 Series models. Due to its own metal characteristics, the aluminum alloy plate used in the new 5 Series Li has a higher requirement for the stamping accuracy, which is more than 3 times that of the steel plate and the tolerance must not exceed 0.02 mm, equivalent to 1/3 of the diameter of a hair filament.

In order to reduce the weight of 130 kilograms and increase the safety of the car body, the car body not only uses a large number of aluminum alloy covers, but also uses more than 30 different metal materials. This requires a different connection process to integrate them. In the new BMW 5 Series Li production, as many as 18 connection technologies are used, including aluminum plate laser welding, arc-swappable arc arc welding and the first-time high-speed hot melt tapping screw technology used in China. Such complex manufacturing technology with advanced technologies cannot be completed manually. Therefore, many joint-venture vehicle factories have entered the Industry 4.0 era as much as the BMW Brilliance Dadong Plant. The core of the joint venture car manufacturing enterprise is â€œsmart manufacturingâ€ and the key to intelligent manufacturing. It is big data. Behind the digital production, the most important one is the support of big data.

In terms of self-owned brands, the SAIC Group's Lingang plant has four major production workshops and engine factories for stamping, bodywork, paint, assembly, and a 4000, 5000, and 6,000-ton stamping press for each production line in the press shop. Each minute can be stamped 5- 7 finished products, a total of three production lines. The welding workshop currently has 235 robots, 76 sets of PLCs, 195 sets of safety devices, 76 sets of coating equipment, 232 sets of robotic welding guns, and 212 sets of manual welding guns. The daily production capacity can reach 40 sets per hour. Thanks to the OpenGate+butterfly technology, different models can automatically replace work stations, thus enabling the production of up to three platforms and six types of vehicles. Lingang factory spraying line, Lingang factory uses FANUC P500 robots for spray coating, color paint and varnish, and the robot manufacturer has a branch office in Shanghai can be adjusted at any time according to demand, fast and convenient, to ensure the quality of vehicle spraying. The assembly plant at SAIC Lingang is much higher than the automation rate of many joint venture OEMs.

After China's automobile OEM factory entered a period of rapid development, both the degree of internationalization of equipment and the professional quality of workers have doubled. "In 2000, the manufacturing labor cost in Mexico was twice that of China. But since 2004, the wages of Chinese workers have almost doubled five times, while Mexican workers' wages have only risen 67%." A book entitled "Mexico: Global Nova wrote in the book. However, at the same time as a five-fold increase in wages, Chinese auto workers have a higher professional quality. According to Huang Bo, paint shop of FAW-Volkswagen Chengdu Branch, the introduction of Chinese local auto workers can not only improve the craftsmanship in the traditional manufacturing process (coating and polishing), but also deepen learning in the intelligent field. Learning, etc. will be promoted, and the factory will often hold training in specialized areas.

FAW-Volkswagen has specialized agencies to provide training for workers, including professional and general knowledge, as well as management training at the management level. Huang Bo said that his own growth is inseparable from vocational training. Huang Bo exemplifies his own type of work. â€œIn the past, spray guns needed to sense how much gas was released when they were sprayed to this location. After a long time of operation, they knew it by experience. But for operating robots, Need to be controlled by software. After a problem occurs, it is necessary to analyze the reasons, such as the cause of the robot itself, or the problems of paint, environment, and the arrival of vehicles. There will be more knowledge involved.â€

Through the above analysis, today's China's auto industry has a huge market, a sound supply chain and infrastructure, and more soft power continues to improve. Stock ratio opening is certainly not a "flood and scourge" in this era, but it stimulates the high level of China's auto industry. The catalyst for continuous improvement of sophisticated technology.